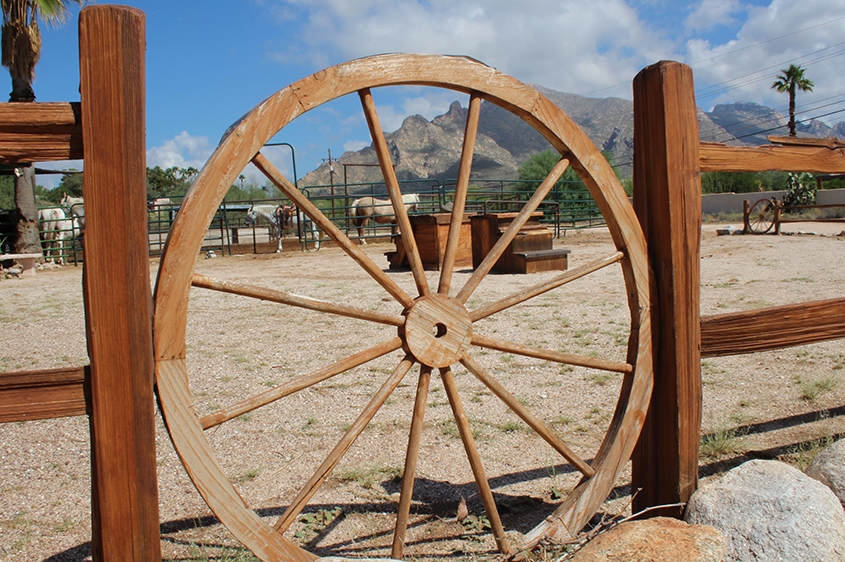 From downtown Tucson, Arizona, head North on N La Canada Dr to W Ina Road. Turn Right on W Ina Road to N Westward Look Dr. Turn left and the resort will be on your right. See you there!

Join us on a horseback trail that will be guided through the WestWard look resort which is Nestled in the foothills of the Catalina Mountains these trails offer beautiful desert scape scenery as well as majestic mountain views. Situated on 80 acres in the pristine Sonoran Desert, authentic Southwestern charm prevails at Westward Look Wyndham Grand Resort & Spa in Tucson, Arizona. Originally built as a hacienda-style family home in 1912.

Lessons On the trail $54

$28 for boarding only (feeding and cleaning not included)

$32 for boarding and feeding (cleaning not included).

Known for their luxury and hospitality, Westward Look Resort and Spa is your place to get away for the weekend or longer and enjoy some “me” time! We are proud to offer horseback riding at this popular destination! Just minutes north of Tucson, Arizona, Westward Look Resort offers the convenience of the city with the serenity of a faraway sanctuary of relaxation. Trail rides will take you into beautiful Sonoran desert terrain with beautiful desert plants and various native wildlife. Come experience the Southwest at its finest!

Westward Look has been around as a community staple for luxury and hospitality! Catch a glimpse of the history of this awesome resort as recorded on the Westward Look Resort Website:

In the front, the sun climbs slowly, so slowly. But Westward, look, the land is bright.

Westward Look Wyndham Grand Resort & Spa, a historic hotel in Tucson, grew from an elegant hacienda-style family home built less than six months after Arizona became a state in 1912. Tucson’s population was a mere 13,000 residents when William Watson and his wife, Maria, bought 172 acres of homestead land that was considered desolate, isolated and a long ride on a bumpy dirt road, far from the emerging city in the valley below. Yet, the Watsons set about building their dream home. They sought the services of well-known Tucson architect Merritt Starkweather. The Watsons envisioned a traditional adobe home, popular in the American Southwest in the early 1900s. Under Starkweather’s guidance, their romantic dream was realized. An elegant adobe-style home was built, complete with an artist’s loft, spacious living quarters, Spanish-style courtyard and glorious views of the lush Sonoran Desert and the Santa Catalina Mountains. So convincing was Starkweather in his design and construction of this authentic “adobe” home that it was decades before anyone realized that the walls are not really adobe, but cleverly disguised concrete and steel, finished with adobe.

From this christening, the legend of Westward Look Wyndham Grand Resort & Spa took root. Many guests returned year after year, some staying for a few weeks and others for months at a time at our hotel near the Catalina foothills in Tucson, AZ. The Nasons partnered with American Airlines, inviting the pilots and stewardesses to stay at the ranch and renting rooms to the families of pilots who came to Tucson for flight training. In the 1950s. Walt Disney filmed his award-winning documentary, “The Living Desert,” in this area and housed some desert animals in the stables. Once the filming was over, Mrs. Nason contacted the fledgling Arizona-Sonora Desert Museum and offered to donate the prairie dogs and coatimundi that were left behind. That was the start of the museum’s small mammal collection. A regular winter visitor to Westward Look was Chicago artist Haddon Sundblom, who created icons of advertising, including the Gerber baby, Aunt Jemima and the Coca-Cola Santa. In 1953, he painted two of the Nason daughters serving Santa a Coke. That endearing image endures today on highly collectable greeting cards, serving trays and other memorabilia.