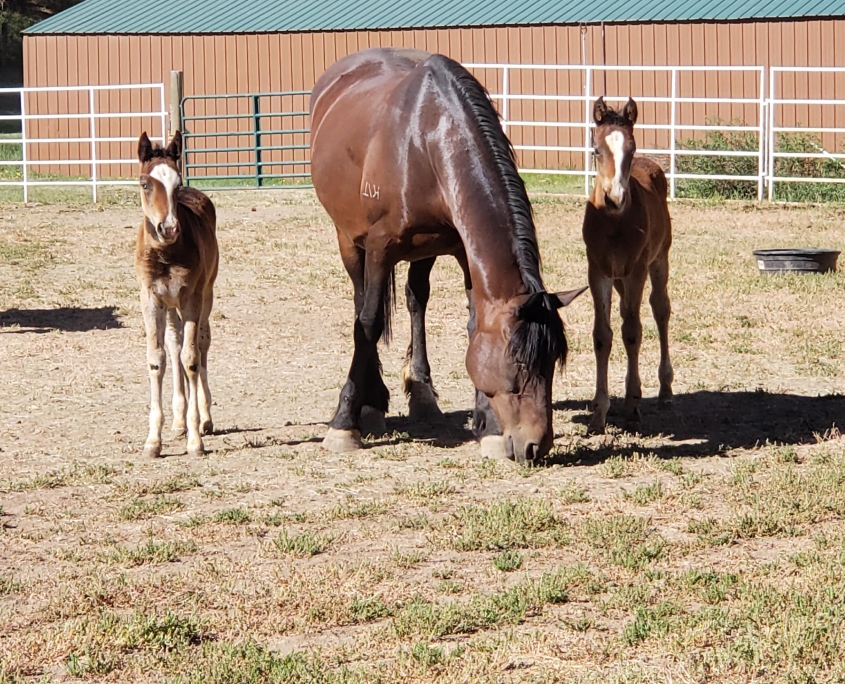 Located just minutes from downtown Pagosa Springs, you can go from the bustle of the city to the serene calm of the wind blowing through the pines! Just head west on Hwy 160 to San Juan Street. Head north on San Juan Street, then take a right on Piedra Rd. The ranch is on your left approx two and a half miles in. Can’t wait to see y’all!

Closed for the 2020 Season. See y’all May 2021 (weather permitting)
All Around Trail Horses operates out of Diamond Hitch Stables located just on the outskirts of picturesque Pagosa Springs, Colorado. See the breathtaking views of the San Juan and Weminuche Mountains from the back of a horse! Towering pines and the pristine beauty of this country is unforgettable. You’ll be riding healthy, reliable, family raised horses.

Pagosa Springs and the surrounding areas are full of FUN activities for the whole family! With an abundance of outdoor activities in and around Pagosa Springs, you definitely will have no shortage of things to do! After you have experienced the joy of horseback riding the mountain terrain at Diamond Hitch Stables, spend some time doing many of the other activities in our backyard! Hiking, biking, kayaking, and exploring the historic town of Pagosa Springs are all ways to enjoy your stay in Colorado. Explore the amazing culinary scene in town visiting craft breweries, casual eateries, and amazing upscale dining destinations. If you’re willing to venture out beyond the borders of Pagosa Springs, there are many state and national parks and wildlife areas to observe some of the native creatures and vegetation of the region.  Can’t wait to see you!

Pagosa Springs is rich with historical and cultural legends and stories! Taken from the Pagosa Springs Official Website, take a peek at some of the area’s history:

The earliest inhabitants of the Pagosa Springs area had roots well over 10,000 years ago as nomadic hunter-gathers. Anthropologists have put forth the theory of a land bridge from Asia to North America crossing the Bering Strait. These early peoples lived in the region for thousands of years. The modern descendants of these tribes are now known as Ancestral Puebloans, the ancient Native American culture centered in the Four Corners region comprising of southern Utah, northeast Arizona, northern New Mexico and southern Colorado. They lived in a range of evolving structures including pit houses, pueblos and cliff dwellings. They used the cliff dwellings during times of unrest and were designed so that they could lift entry ladders during enemy attacks.

Evidence shows an extended drought drove the Ancestral Puebloans out of most of their homeland following rivers downstream. They became the Puebloans of today living along the Rio Grande River, the Hopi Reservation and a few other locations.

Revered by Native Americans, the Great Pagosa Hot Spring was frequented by many of the tribes. Accounts from the early Anglo explorers in the area describe well worn trails from all directions converging on the springs, with depressions and sweat lodges, located around the seeps and cavities near the big spring.

Local legend tells of a battle to settle the rights of ownership of the spring between the Navajos and Utes. The battle is said to have taken place around 1867. The tribes skirmished, but neither gained any advantage. Both tribes agreed to settle the dispute by each sending a single representative to fight for their respective tribes, in what can be assumed was a battle to the death. As legend has it, the Navajos chose a huge brave to represent them; the Utes gave the privilege to a white man. Colonel Albert Pfeiffer, an Indian agent and friend to the Utes, agreed to represent them. Knives were chosen for weapons. The legend ends with the smaller, more agile Pfeiffer outmaneuvering the larger Navajo brave and killing him with a thrust to the heart. However, the Utes control over the Great Spring was relatively short lived. The Brunot Agreement of 1874 signed the control of the springs over to the white man, signaling the beginning of the end for the open, free-ranging control of the Utes in Colorado. Many local names and much of the Pagosa Springs history are attributable to the Ute Indians.

Another local legend, The Legend of Treasure Mountain, tells of a large expedition of Frenchmen who were exploring, mining, and prospecting for gold in the Ured ill the 1790’s. The I.::aravan was said to have camped in the vicinity of Treasure Mountain. Disease, hostile Indians, and severe weather forced the Frenchmen to cache the gold they had found. Only 17 men survived to reach the French outpost of Leavenworth, Kansas and only two had maps of the gold caches. There has been evidence of the caravan found in the area, but the $5 million in gold remains hidden to this day.

By the early 1500’s, the Spanish had conquered and settled Mexico and had moved to within 200 miles of Pagosa Springs. The process of conquest and colonization was slowed considerably by hostile Indians and the rugged Rocky Mountains. The Spanish government, which was
centered in Santa Fe, New Mexico, sent Don Juan Maria de Rivera on an exploratory mission in 1765. Rivera led a party northwest out of Santa Fe in search of gold and silver. The party traveled through Pagosa Springs and the San Juan Mountains to the Gunnison River.

In 1776, the authorities in Santa Fe switched some of their focus from gold exploration to developing a trade route which would connect the Santa Fe, Rio Grande Valley and Northern Mexico settlements with the thriving Spanish colonies in California. On July 29, Padre Francisco Atanasio Dominquez and his secretary, Silvestre Velez de Escalante led an expedition out of Santa Fe to explore a possible trade route to California. They had a guide with them, Jaoquin Lain, and eight others, who had been on the Ri vera expedition.

The Dominquez-Escalante expedition entered Pagosa Springs near what is now Carracas. Their campsite, near Carracas, was called “Nuestra Senora de las Nieves, which means “Our Lady of Snows.” The party explored much of the area before moving west through the Allison and
Tiffany area and on into Utah.

The route that the Dominquez-Escalante expedition opened became known as the western portion of the Old Spanish Trail. This trail passing through Pagosa Springs was a major corridor for opening the country to travel and settlement. Countless trappers, traders. horse and mule
caravans, explorers, and travelers used the trail over the years.

The first Anglos or English speaking white men, to enter Pagosa Springs were undoubtedly the trappers and explorers who would later become known as the “mountain men.” Mexico won her independence from Spain in 1821. Pagosa Springs was Mexican territory at that time and the new government was eager to develop trade with the United States. Trapping and other trade was encouraged.

The mountain men who frequented the San Juan’s and the Pagosa area were generally working out of Taos, New Mexico. The “Southern Trappers,” as they are called in the history books, had an abundant supply of game and fur bearing animals to hunt and trap in this area. Some ( of
the colorful characters who trapped and wandered this country were Pegleg Smith, Jacob Fowler, Antoine Robidoux. Etienne Provost. Francois Leclerc, Ewing Young, Isaac Slover, and William Wolfskill, to name a few.

Kit Carson is said to have built a cabin on, or near the Navajo River. In the fall of 1833, he accompanied a party led by Captain Richard Bland Lee, which followed the Old Spanish Trail out of Abiquiu, New Mexico, through Pagosa Springs to Ouray to the northwest. Some of the “Northern Trappers” came down through the country in the late fall to winter in the warmer southern climates as well.

The honor of the first recorded visit to the Great Pagosa Hot Spring is given to Captain John N. Macomb. Leading an expedition for the United States Topographical Engineers, Macomb first sighted and described the springs in July 1859. His party also came up out of Santa Fe; split near Tierra Amarilla and entered Pagosa Springs from the southeast. Macomb’s group entered near Edith and proceeded up through Coyote Park across the Blanco River where they camped and were joined by the other group, and then proceeded on to the Great Pagosa Hot Spring.

The discovery of gold in the Rocky Mountains and rumors of gold in the San Juan Mountains led to a great influx of prospectors and miners into Pagosa Springs in the 1860’s and early 70’s. As more and more white men came into the area, over the mountains and up the Old Spanish Trail
tensions between the Ute Indians and the miners increased. The military needed to take action and established an Army post in the area. The site of the Great Pagosa Hot Springs was chosen for a military outpost.

Camp Lewis, later called Fort Lewis, was erected on the West Bank of the San Juan River opposite the Great Spring in the fall of 1878. Private claim, had already been staked around the spring, although a one square mile area around the big spring had been declared a townsite on May 22, 1877, by presidential order. A six square mile area centered on the spring was declared a military reservation on January 28, 1879.

Although it was short lived, Fort Lewis played a major role in the settlement of Pagosa Springs. By the time the last soldier pulled out, Pagosa Springs was well on its way to becoming a town.

The settlement of Pagosa Springs occurred rather quickly. Once the news of the Great Hot Springs got out, travelers began to arrive to partake in the reported medicinal qualities of the bubbling mineral springs. Drawn by the springs and the fertile surrounding area, many pioneers began to stay by the early 1880’s. The early settlers raised cattle and sheep, hay, grains, and vegetables. They established businesses catering to the soldiers and travelers through Pagosa Springs. Bathhouses sprang up around the Great Pagosa Hot Spring. Motels and saloons were available. Some residents were seasonal, moving back and forth between the mining areas and Pagosa Springs.

In May of 1883, the townsite of Pagosa Springs was surveyed and platted. Archuleta County was established in 1885, named in honor of Antonio D. Archuleta who sponsored the legislation. Pagosa Springs was incorporated on March 2, 1891. This action marked a turning point from a rough and tumble frontier village to a growing town. With the growth of cattle and sheep ranching, and the development of the lumber industry, Pagosa Springs began to flourish in the 1890’s and early 1900’s.

Two large lumber mills and many smaller ones were established in the area. The large mills helped bring in the long awaited train to Pagosa Springs facilitating travel and movement of trade and commerce. A great influx of workers and support businesses moved into the area. The lumber boom lasted almost into the 1920’s by which time the easily accessible timber had all been logged.

The Town of Pagosa Springs was growing. Churches, mercantiles, blacksmith shops, hotels, bathhouses, schools, newspapers and civic organizations were thriving. With the opening of Wolf Creek Pass on August 21, 1916, the entire Sun Juan Basin was opened to greater economic development and commerce. Automobile travel was the key to future development and the new all -weather road unlocked the isolation of the entire Southwest.