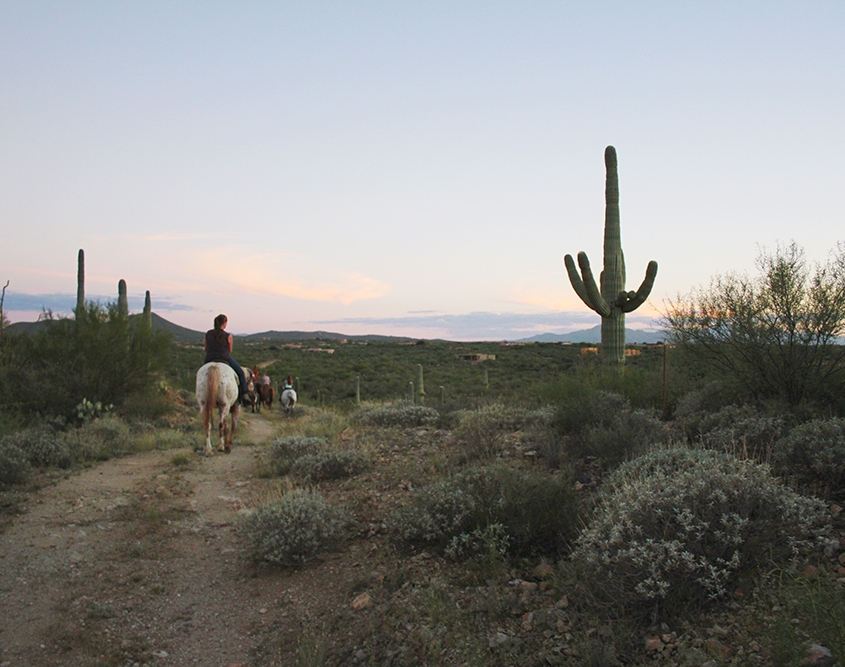 Just a short drive southeast of Tucson, Arizona, Saguaro Stables is a convenient destination for fun for the whole family! Just take I-10 E to exit 279 for Wentworth Rd. Then turn left on Colossal Cave Rd. Approximately 1 mile, turn left on S Camino Loma Alta and travel approx 4.5 miles until you see the stables on the right! See ya there!

Our Professional wranglers would like to invite you to enjoy a trail ride through the wonder of a Sonoran desert sunset on horseback. Climb the mountain trails as you take in the fresh air and a view filled with endless blue sky, Saguaro Cactus among lots of other species, and glimpses of other wildlife. Unfortunately, we are no longer offering rides at Colossal Cave Mountain Park in Vail, Arizona. Saguaro Stables are the perfect alternative for horseback riding at Colossal Cave Mountain Park!

We offer rides for the Beginners to the advanced riders. We offer a variety of different rides from 1 hour on private property to a 4-hour ride through the Saguaro National Park…

**All Prices Listed are Per Person

Wagon Ride: $48/person
*Take a wagon ride and after have dinner under the stars by a campfire.
6 person minimum with 50% down and credit card to reserve.

We are proud to service the horseback riding community and visitors of Saguaro National Park East. Enjoy beautiful desert landscapes with ridgeline climbs and mountain views complete with abundant saguaro cactus and native wildlife sightings. Just a short drive from Tucson, Arizona, this park is a must see if you live in the city or are visiting the area! It’s one thing to visit the park and quite another to experience it on horseback! See ya soon at the stables!

Saguaro National Park is more than just a collection of cacti! Take a trip back in time and learn about the roots of this amazing natural wonder from the National Park Service Website:

On March 1, 1933, in the last days of his presidency, Herbert Hoover signed a Proclamation establishing Saguaro National Monument in the nearly empty desert, 15 miles east of the sleepy town of Tucson. Wrenched by the Great Depression and awaiting a new administration, few in Washington paid any attention to Hoover’s action. But it was a victory for both botanists and boosters in Arizona who’d worked for years to protect this grandest stand of saguaros. And it was a far-sighted accomplishment that would have incredible benefits for future generations of both Tucsonans and tourists.

It was in 1920 that members of the Natural History Society of the University of Arizona first expressed interest in preserving a stand of the West’s most iconic plant species. Already famous from countless silent movie westerns, the saguaro was high on everyone’s list as a symbol of the frontier. Still, desert land cost money, and the Society’s fund-raising efforts failed. But in 1928 University president Homer L. Shantz, in his role as a plant scientist, took up the cause. He envisioned a vast outdoor laboratory, ranging from the cactus-studded desert to the pine-wreathed mountains, free from human disturbance and studied by generations of student.

Unfortunately, academics’ dreams and political realities seldom mesh. Although Shantz succeeded in purchasing some cactus acreage with University funds, it was clear that other means were necessary. First of all, the agency managing the mountains would have to agree to the grand design. After heated discussions the U.S. Forest Service reluctantly signed on, as long as they kept control and cattle grazing continued. The National Park Service, charged with preserving vistas of grand landscapes and objects of scientific interest, sent the Superintendent of Yellowstone, Roger Toll, on a winter trip to the desert. He liked the Cactus Forest but found the mountains uninteresting and the cost too high. The vision seemed to be fading.

But there were others in Tucson who saw the value and prestige of having a National Monument nearby. Frank Hitchcock, publisher of the local Citizen newspaper, active in the business community, and influential in Republican politics, knew the time was ripe for action in Washington. With help from both agencies he literally rushed to Washington to take advantage of a tradition started by Teddy Roosevelt – the proclamation of National Monuments at the end of a President’s term. With support from the Secretary of Agriculture and the promise of Forest Service management, Saguaro National Monument was born on the first of March, 1933.

But times change – sometimes quickly. Only two months later, President Franklin Roosevelt ordered that sixteen national monuments be transferred to the National Park Service and Saguaro began a long slow march to the treasured sanctuary it is today. Often the progress was painful: early rangers had to haul water from the center of town; “cactus rustling” was rampant; cattle continued to trample young cactuses for decades. Aging of the cactus forest and lack of regeneration led to a widespread belief that the saguaro was a dying breed, like the frontier life it symbolized. Efforts to close the Monument were suggested, but Washington took no action …

And there were successes. Homer Shantz continued his efforts on behalf of the Cactus Forest, leading to Civilian Conservation Corps construction of the famous Loop Drive (fully restored in the summer of 2006!) A Visitor Center opened in the 1950’s and important scientific research brought a fuller understanding of the saguaro life cycle by 1970. Most importantly, in 1961, at the urging of the people of Tucson and Secretary of Interior Stewart Udall, President Kennedy added 25 square miles of splendid cactus lands in the Tucson Mountains to the Monument. Finally, after setting aside vast areas as wilderness, Congress elevated Saguaro to National Park status in 1994.